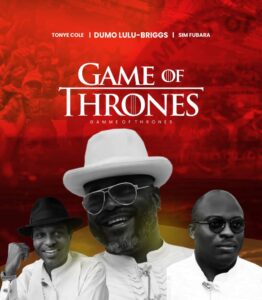 Wednesday and Thursday being May 25th – 26th 2022, finally defined the spectacle that the forthcoming gubernatorial polls in 2023 shall be little else beyond a game of thrones and consolidation of political dynasties, by acolytes of the incumbent Governor Nyesom Wike, and his predecessor as well as immediate past Minister of Transportation, Chibuike Amaechi. This will be except for the now confirmed intervention by Chief Dumo Lulu-Briggs who is vying for the office of governor of the state on the platform of Accord Party (AP). Lulu-Briggs has so far not been associated with any political godfather. Those earlier mentioned days marked the emergence of the flag bearers of the two leading political parties in the state being the Peoples Democratic Party (PDP) which held its primaries on Wednesday and the All Progressives Congress (APC) that delivered on Thursday; even as their enterprise had been associated with pandering to the dictates of political godfathers, and has therefore spawned the gnawing feeling that the state under any of these parties for the next dispensation, may remain a battle ground for supremacy of parochial interests. 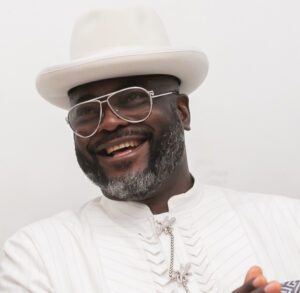 For instance the PDP which held its governorship primaries on Wednesday produced Siminialaye Fubara as its flag-bearer, through a process whose outcome was long predicted, courtesy of his tacit endorsement by the state governor Nyesom Wike, through unmistakable body language. Until just before the primaries, Fubara had been the Accountant General of the Rivers State and hence a civil servant, and only resigned ostensibly to contest the primaries. Meanwhile, the emergence of the governorship candidate of the APC has been sailing through troubled waters with the party structure split between the two factional leaders – Amaechi and Abe. That was until yesterday Thursday, when a proper primaries exercise was conducted and Tonye Cole emerged as the authentic governorship candidate of the Rivers APC. Incidentally one of the prominent figures in the APC and a governorship aspirant Magnus Abe, withdrew from the primaries contest, citing personal reservations. However, with this development, the APC in the state has now progressed into a terrain of having its candidates for respective electoral offices on the ballot box, a liberty which had been denied it during the 2015 and 2019 polls, when due to its internal crises, it lost.

In the present circumstances, the three leading political parties in the state have their governorship candidates as Dumo Lulu-Briggs for Accord Party (AP), Tonye Cole for the All Progressive Congress (APC) and Siminialaye Fubara for the Peoples Democratic Party (PDP). The question now is to which extent will the fortunes of the state fare under any of these candidates that wins the election to the office of governor of the state from May 29TH 2023.

While not delving into their antecedents a peep into the frontal challenges of the state, provides some modicum of guidance for the way forward. And such a perspective cannot but derive from juxtaposing the present state of affairs, with what each of them will hopefully bring to the table as governor. For instance, among the challenges bedeviling the state today are unemployment, insecurity, massive rural urban drift, one-city status as well as political and economic exclusion of a wider section of the society, as well as weak governance expedients, which manifest as clueless statutory responses, by the state and local government tiers, to certain challenges. 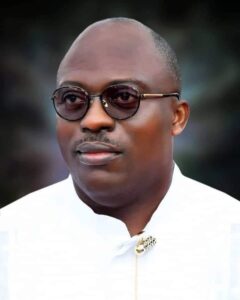 The acuity of this situation for the Rivers State cannot be over emphasized. As the hub of the country’s hydrocarbon industry, the state is a receptacle of sorts for the nation, as on a daily basis thousands of Nigerians from other economically depressed parts of the country and foreigners alike, flood into it to settle. This factor alone makes the state a mini Nigeria, and has escalated the unemployment as well as congestion crises to an extent that will challenge any governor, to his wits. Therefore, along with other challenges of governance, what should bother the political class and the generality of the citizenry is how the state can escape from the shackles of retardation imposed on it by the aforementioned challenges and others. For against the backdrop of its humongous endowments, life for the typical resident is like a man that is thirsty in the abundance of water. What shall therefore be sweet music to the people of Rivers State is a fore taste of the specific responses which each of the candidates shall launch at the sectoral challenges that bedevil it.

For instance, according to the Nigerian Bureau of Statistics (NBS), unemployment which is one of the most aggravating factors of the pains of the state, currently stands at 43% – next only to Imo State (48.7%) and Akwa Ibom (45.2%). This figure for the state compares unfavourably with the national figure of 33%, given that it is expected to serve as one of the locomotive economies that should drive the Nigerian economy forward. Hence, when it also manifests depressing characteristics, the question now becomes which is to drive which between the national economy and Rivers State? Not a few observers have lamented over the state’s economy of the state, as it had consistently failed to meet policy targets in many areas; a matter that forms the substance of subsequent articles. 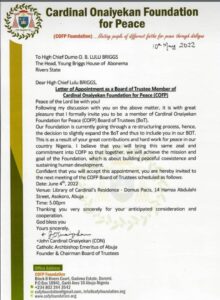 In the ninth verse of the book of Matthew the Bible records our Lord Jesus Christ as saying that ‘Blessed are the peace makers for they shall be called the children of God.” In another section – this time the 133rd chapter of the Psalms, the same Bible records “How good and pleasant it is when brothers live together in unity! It is like precious oil poured on the head, running down on the beard, running down on Aaron’s beard, down upon the collar of his robes. It is as if the dew of Hermon were falling on Mount Zion.” These two passages among numerous others in the Bible, testify eloquently to the premium which Almighty God places on peaceful co-existence among all humanity, even with their differences in antecedents, backgrounds and pedigrees.

If nothing else, the recent appointment of Chief Dumo Lulu-Briggs to the Board of the Cardinal Onaiyekan Foundation for Peace (COFP), resonates with the nationwide call for return of peace to the Nigerian nation, which is today bedeviled by sundry acts and tendencies that have chased peace away from our shores. Coming at a time of palpable tensions and portends of escalation of same, nothing deserves a most desired welcome now than efforts by the government, sundry organisations and individuals to promote the return of peace to Nigerian streets.

It is in this context that the COPF enjoys merit. The Foundation a non-governmental organization with the mandate to provide a platform for building and strengthening the processes of peace and social change in Nigeria and Africa at large. Established in 2010 by John Cardinal Onaiyekan, one of Nigeria’s most respected faith leaders and a passionate advocate for religious tolerance as well as inclusiveness, the Foundation recognizes that most conflicts in Africa (despite their ethno-religious colorations) are symptoms of deeper structural problems arising from all manners of exclusion – religious, ethnic, political, economic, as well as gender factors, which can only be adequately resolved through governance structures that are both ethical and just.

COFP therefore strives to address these challenges by, among other things, promoting ethical leadership, offering a space for faith leaders, citizens and political leaders at all levels to engage in discussions for peace and development. The Foundation also assist in providing conflict parties with critical skills for peace-building, conflict management and transformation within their communities. 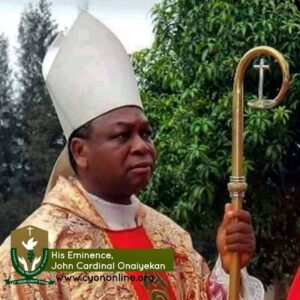 As a Foundation for inclusive dialogue, and driven by the principle of common good in line with the Social Teachings of the Catholic Church, the guiding point of reference for COFP is the Nostra Aetate Declaration of the Second Vatican Council on Interreligious Dialogue and the UN Sustainable Development Goals (SDGs). COFP is also guided by decades of leadership in addressing social injustice, interreligious dialogue and collaboration for peace and resilience of all Nigerians.

This is why the Foundation is keen to engage with everyone, particularly marginalized groups- women, youths, children and others on the margins of society – recognizing that peace is a condition for transformative development which all must be involved.

The utility of the COPF at this time in the history of the country cannot be overstated. Hardly a day passes without painful tales of breaches of peace in various parts of the country, accompanied by instances of violence and predictably, casualties. It is no more within the terrain of conjecture that Nigeria is at war with itself. And as is not debatable, only efforts at restoring peace remain the way out of its quagmire.

For the Rivers State, the present state of affairs is not at variance with the rest of the country, that is if not more acute. The bigger concern for the state is actually to which extent the situation may impact the forthcoming 2023 polls exercise which is already being heralded by instances of anomie and violence. For instance, just last week there was a resurgence of cult wars in the Diobu area of Port Harcourt with casualties resulting from the fracas.

It has long been established that the primary, causative factor for social turbulence in the state and the rest of the country derives mostly from the chronic state of economic, social and political exclusion of a wide section of the citizenry, with a reversal of their status offering the only way out of their plight, and hence the danger which they pose to the rest of society.

In his private capacity, Chief Dumo Lulu-Briggs enjoys a distinguished track record as a philanthropist and a social rights crusader, whose mission remains the promotion of inclusion of the down trodden in the processes of social dynamics. His philanthropic outreach under the auspices of the DLB Foundation, has gulped millions in naira as well as dollars and has impacted thousands of Rivers State indigenes across the 23 Local Government areas, not to talk of beneficiaries outside the state. 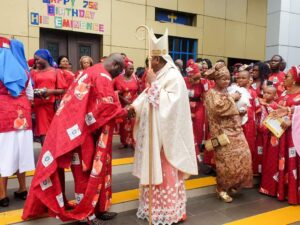 Courtesy of his personal credentials as a peacenik, he is seen today as the most potent factor that can usher in peaceful coexistence among the disparate communities in the Rivers State and ensure meaningful development. Most importantly his peaceful disposition ranks him as even the man with the capacity to call warring political camps in the state to a round table. He has done so severally and is disposed to do so again, whenever called upon. The appointment of Chief Dumo Lulu-Briggs by the COPF, is therefore one such engagements that will expand the threshold for peace initiatives in the country.

Congratulations, High Chief and welcome to another call to national duty, in which your characteristic industry and selflessness will come into play.